Putz has recently acquired a few ripsticks ripstiks. It's probably safe to say that half of the current putzen have mastered how to ride these things. I left my orbit wheels and freeline skates out in the hallway hoping people might want the extra challenge. But, I soon forgot they were on putz, and they were eventually grunged by JoeG's crew. Lately, I've been wanting to orbit wheel; that's enough incentive to build some. I'll probably end up turning this into an Instructable. It would be pretty easy for makers to laser cut, water jet, or possibly 3D print a pair of freeline skates rather than invest $150 in the manufactured version. I tried making them as small as possible to build some intuition for the strength of the aluminum supports. 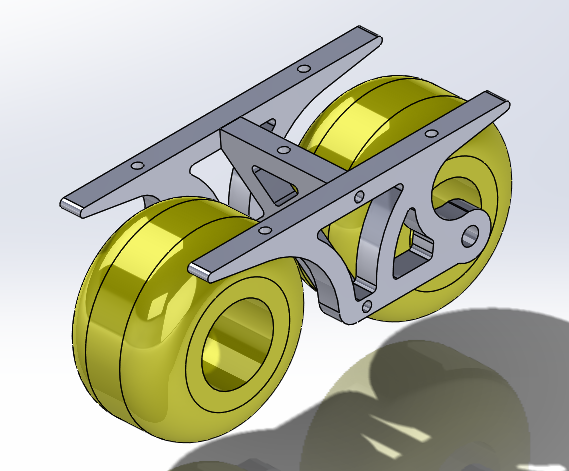 Read after the break for a quick build log:

I've been falling into this trend of posting weeks or even a months after the fact (actually it's not even a trend anymore; I just haven't been posting). This will hopefully stop as soon as I've settled on one website with a stable blogging system. (I currently have jaguark.mit.edu, where I'm playing around with Drupal, jaguark.wordpress.com, kriste11er.com, and this site). I have to say, I probably wouldn't have gotten around to posting this if it weren't for my awesome cousin Alex, who was fascinated by the mini battle bots. 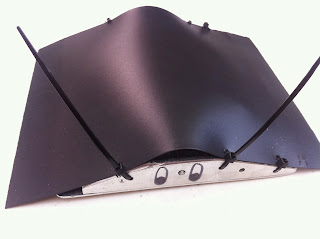 So. How I unexpectedly built a mini battle bot over night:

I've been meaning to build an electric vehicle a bit more exciting than my Electric Orbit Wheels. And by a bit more exciting, I mean ridiculous acceleration, drifting, and driving around MIT campus at odd hours of the night. It's about time I built something that I could bring along and race Ben's trike in the Stata basement. I've accumulated a few very nice parts from the recently deceased club in N51, Vehicle Design Summit (VDS). Most of this kart will be assembled from parts I scrounged from VDS: hence the name VDSKart.

Due to the ridiculous size of the solar car axial flux motor that Ben generously donated, this vehicle is going to be a full sized racing go-kart, a slight deviation from MITER's smaller electric vehicles. It's probably going to weigh upwards of 150 lbs and won't fit through doorways, but it will go really really fast and accelerate like a sports car. I'm using aluminum round tubing for the frame to decrease weight, to learn how to weld aluminum, and because it's available.

After looking at many different designs for racing go-karts, I came up with this frame. 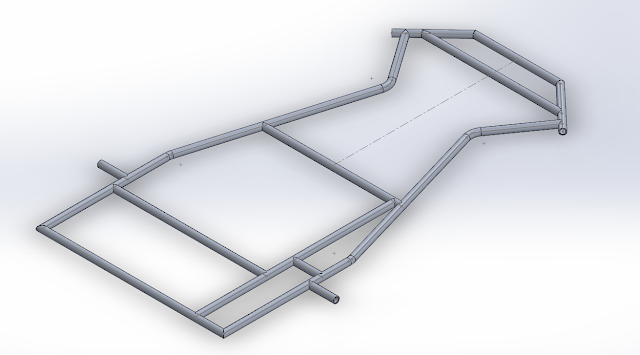 More on practice welds and crufted parts after the break. 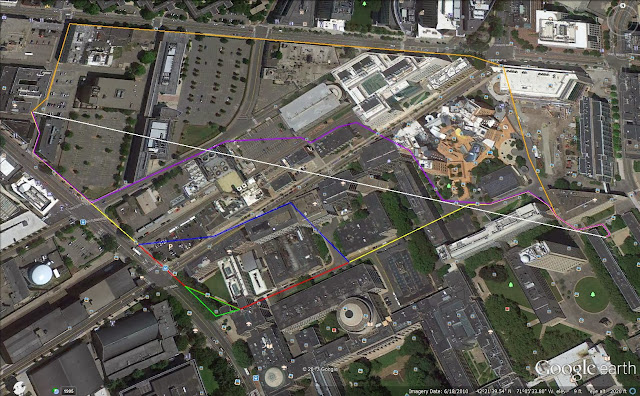 I finally got around to precisely measuring the different EC to MITERS routes on Google Earth. I wasn't sure how the path through the Swapfest parking lot compared to the others, but this confirms its about the same distance. As for the numbers:

So really, the shortest path is past Building 13 and along Mass Ave with the diagonal sidewalk towards the intersection of Mass Ave. and Vassar (which only saves 10 meters (+/- measurement error)).

The red path is also probably the fastest because of the straight stretch past Building 13. However, I've gotten a little bored of the same route, and have now switched to the purple path (even though it's 2-10 meters longer).

Just for kicks, here's the same route placed over MIT the year after I was born. 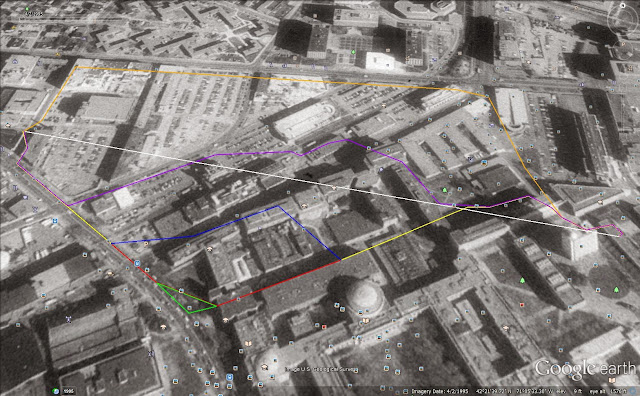 Earth in the Foreground: Building the Pan/Tilt Time-lapse Platform 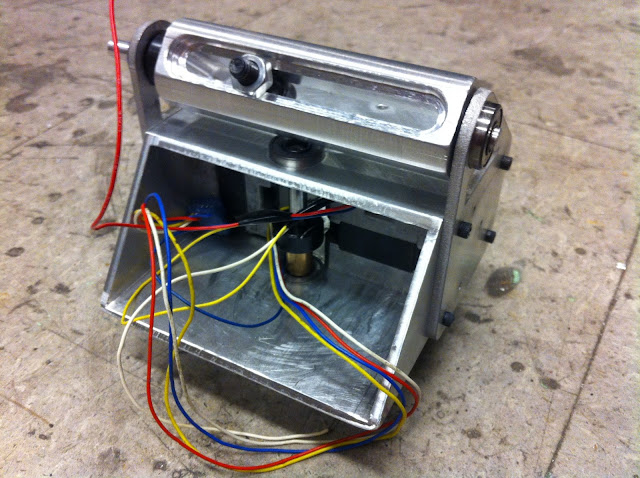 Before heading up to Alaska to film the Sun up above the Arctic Circle, I made a device to slowly move the camera in pitch and yaw using some of Joseph's stepper motors and scrap metal around CSAIL.

Labels: Earth in the Foreground, Mechatronical Links to this post 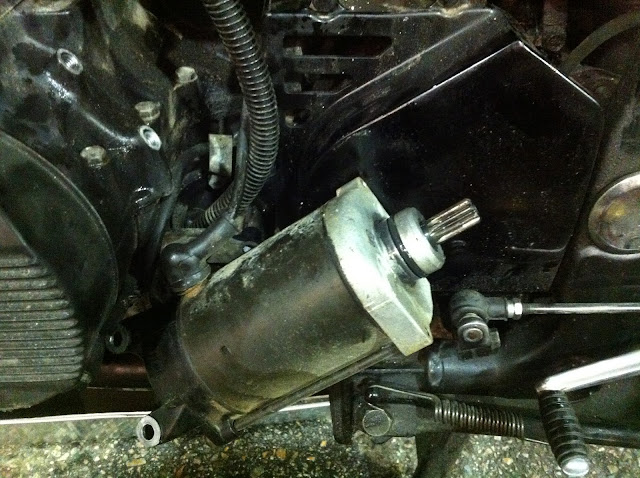 After reading and talking with some friends, I realized my earlier conclusion that the starter motor had a short is not the case. Because it turned slightly, the current is providing some torque. Therefore, it isn't shorted. If the starter motor did have a short, it would not have turned at all when I hooked the battery straight to the motor.

With that, I went out, found some containers that looked like they would do the job, and drained the engine oil and the coolant system. (Afterwards, I learned my lesson on how to find appropriate hazardous waste containers and dispose of them properly). 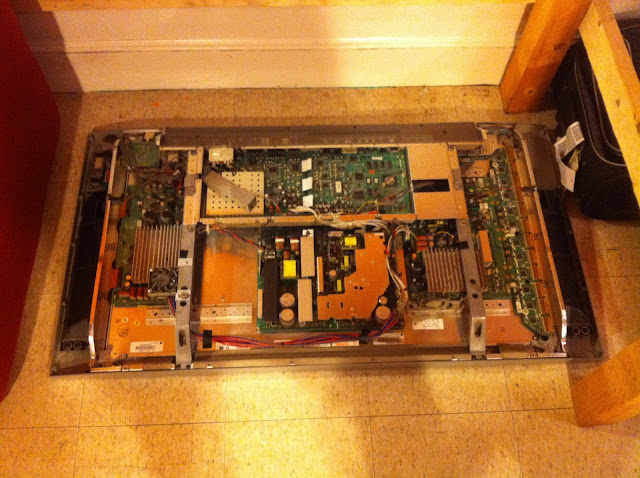 A couple days after the end of 2.00 Gokart there was a huge supply of electric vehicle goodies. Unfortunately, I was at the final performance of Roadkill Buffet, "MIT's premier improv comedy troupe", while most of the good cruft got crufted. Some of the earlier crufters got their hands on a 42" plasma LG TV and tried fixing it on the spot (thinking it was just a blown fuse). By the time I got there, they were giving up on it. So, being the naive and ambitious person I am, I decided to carry it back to EC and learn a bit about how plasma televisions work. Thankfully Ed Moriarty was there cleaning out the 2.007 Underwater Vehicle section's materials, and was able to drive the TV over to East Campus. After some debugging and replacing some parts, I ended up with a pretty big monitor.

Raku Watari and I used to play a lot of Billiards and Cut-Throat at ADPhi when we were room-mates freshman year. We would try improving our techniques by hitting with spin and trying to predict where the ball would end up to be in line for the second shot. After awhile, we got tired of the same game and decided to "invent" a new one. We present Krepes: 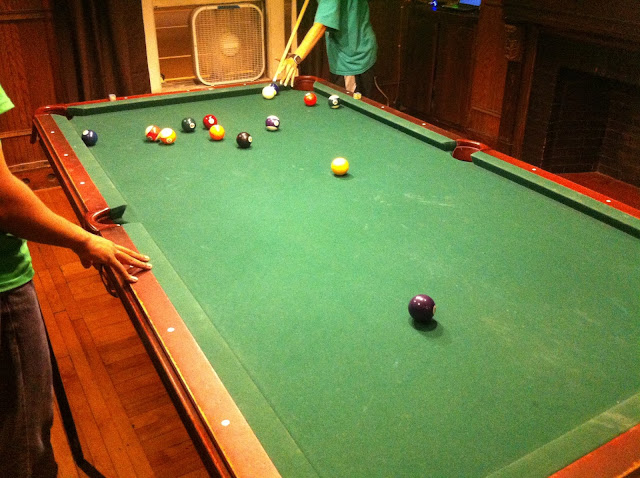 Why Krepes, you ask? Because we were eating Infinite Crepes at one of ADPhi's Rush events while we thought it up (and also, because it has nothing to do with the game--similar to Puzzles).

Fouls: Resulting in Loss of Turn

Fouls: Resulting in a Scratch

Placing the Cue Ball after a Scratch:

A player, who follows after the previous player scratched, can place the cue ball anywhere on the table. However, he/she cannot pocket the 8-ball with a striped ball to win with his/her chosen cue ball position.

The General Rules of Pocket Billiards apply except when directly contradicted by these rules. If you have any suggestions or ideas for improving the rules, please comment below. Enjoy!

Posted by Jaguar Kristeller at 12:31 PM No comments:

I've been reading through the manual to troubleshoot why the starter switch might be causing the relay to go nuts. The ZX600RC1 manual referred to a Base Manual for going through the starter motor removal in detail (which thankfully was updated on this forum 12 days ago).

After reading through the base manual, I found some possible scenarios which may be causing the symptoms it's having. A winding on the starter motor might be open (having infinite resistance) which would make it very difficult for the current to make the starter motor turn. Also, if there's a short between the commutator and the shaft, that would indicate that the armature has a short and would cause weird things to happen to the starter circuit relay. (The starter circuit relay is different than the starter relay, because it's behind the starter lockout switch. The starter lockout switch ensures that the vehicle is in neutral and the clutch is engaged - the clutch handle is out - in order to prevent the bike from being started in gear. The starter relay is what directly controls current to the starter motor).

This picture will help explain: 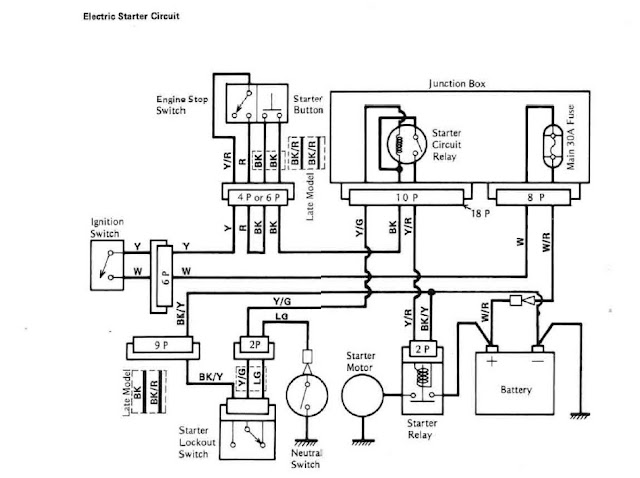 Read more »
Posted by Jaguar Kristeller at 1:29 AM No comments:

Motorbycle: A Bigger Electric Vehicle... Or So I Thought 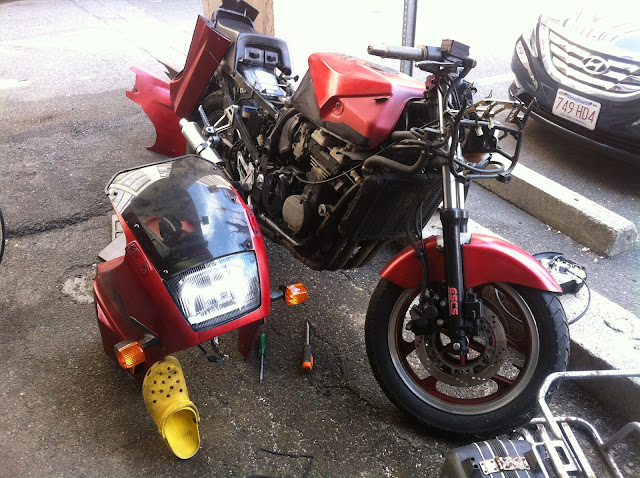 I started playing with the idea of returning to my childhood and making a small motorcycle (not a pocket bike, but a small motorcycle similar to Mars's). (I also wanted to make my own Continuously Variable Transmission (CVT) to help with drag racing in the garage.) I've actually been riding motorcycles for most of my life, I've just never taken one apart or built my own. It's time for that to change.

Read more »
Posted by Jaguar Kristeller at 2:25 AM 1 comment: 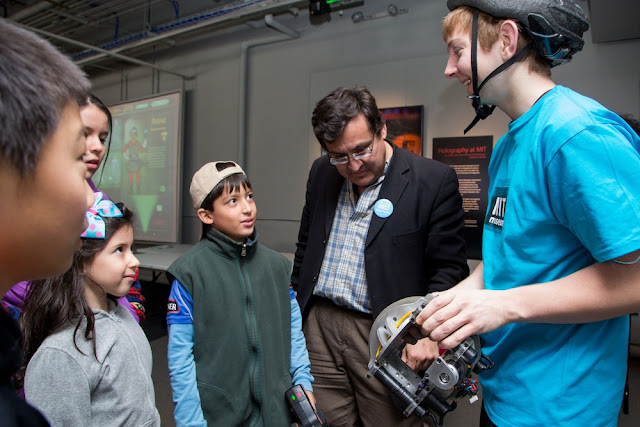 After seeing the Electric Orbit Wheels at Tech Fair 2013, the Director of Education and Public Programs at the MIT Museum, Brindha Muniappan, invited me to the Play Day at the MIT Museum on April 17th to do a demonstration. I didn't hesitate to accept. Since then, I've been demonstrating the orbit wheels and the most recent GlowBoard every other weekend at the museum. It reminds me of the good old FIRST days when my team, 3705 Porhtal, would take our robot around to various schools around the state of Alaska and teach robotics.

For more pictures...
Read more »
Posted by Jaguar Kristeller at 12:44 AM No comments: